There are several weapons you should include in your homesteading self sufficiency survival kit, not only for your safety, but for the safety of those who live or visit your homestead.

These are also good weapons to put in your emergency evacuation bag.

It is important to make sure everyone in your household knows where to find these weapons and how to use them.

It is a good idea to make sure everyone in your home who is old enough takes both a gun safety class and a self-defense class.

Accidents happen, weapons are not toys and while weapons are important to include in a homesteading self sufficiency survival kit, making sure those weapons are used for the right purpose and do not fall into the wrong hands is also important. There is so much debate about gun control and gun violence because of all the armed shooter situations that are occurring.

Even mentioning the importance of a firearm is often met with bitter criticism these days.

People have angry debates over the issue of gun control and with social media being such a popular place for people to share their opinions, the debates can get downright ugly.

However, it is important to be very clear about what a weapon is because the word weapon does not just refer to guns.

The Miriam Webster dictionary online states that it is “something such as a club, knife, or gun used to injure, defeat, or destroy” or “a means of contending against another.”

This is the perfect description for a weapon and this is why every prepper or homesteader needs an assortment of weapons.

There is no need to panic though or let things get out of hand.

What you may not consider to be weapons actually are weapons as you are going to learn below.

Any time you are away from the city, you are going to encounter wildlife.

It doesn’t matter if you are bugging out in the wild during a health disaster, such as a contagion and your plan is to have minimal human interaction, or if you live in the country, wildlife is a fact of life.

This is why keeping weapons on your homestead and also in your emergency evacuation bag is so important.

You don’t want to end up someplace unexpected and have no way to defend yourself.

While it is true that mountain lions, bears, wild dogs and other wild animals will keep away from humans most of the time if you stay away from them, there are always exceptions to the rule.

If a hungry animal smells food or you have coolers that are unsecured, a wild animal might come over to your campsite to investigate, especially if they are hungry.

If you have bear spray in your homesteading self sufficiency survival kit, you will be able to use it on a bear.

The bear spray is a weapon.

It may look like a can of spray, but in this situation, it is a weapon.

Having a shotgun or high-powered rifle with blanks will allow you to fire one round in the air to scare off any approaching wild animal.

This will keep you safe, at least for the moment.

Weapons do not have to be used to kill a wild animal or a person, or even harm them,  for them to be effective.

Often the site of a gun or the sound of a blank being fired into the air is enough to send a wild animal or human scurrying away. 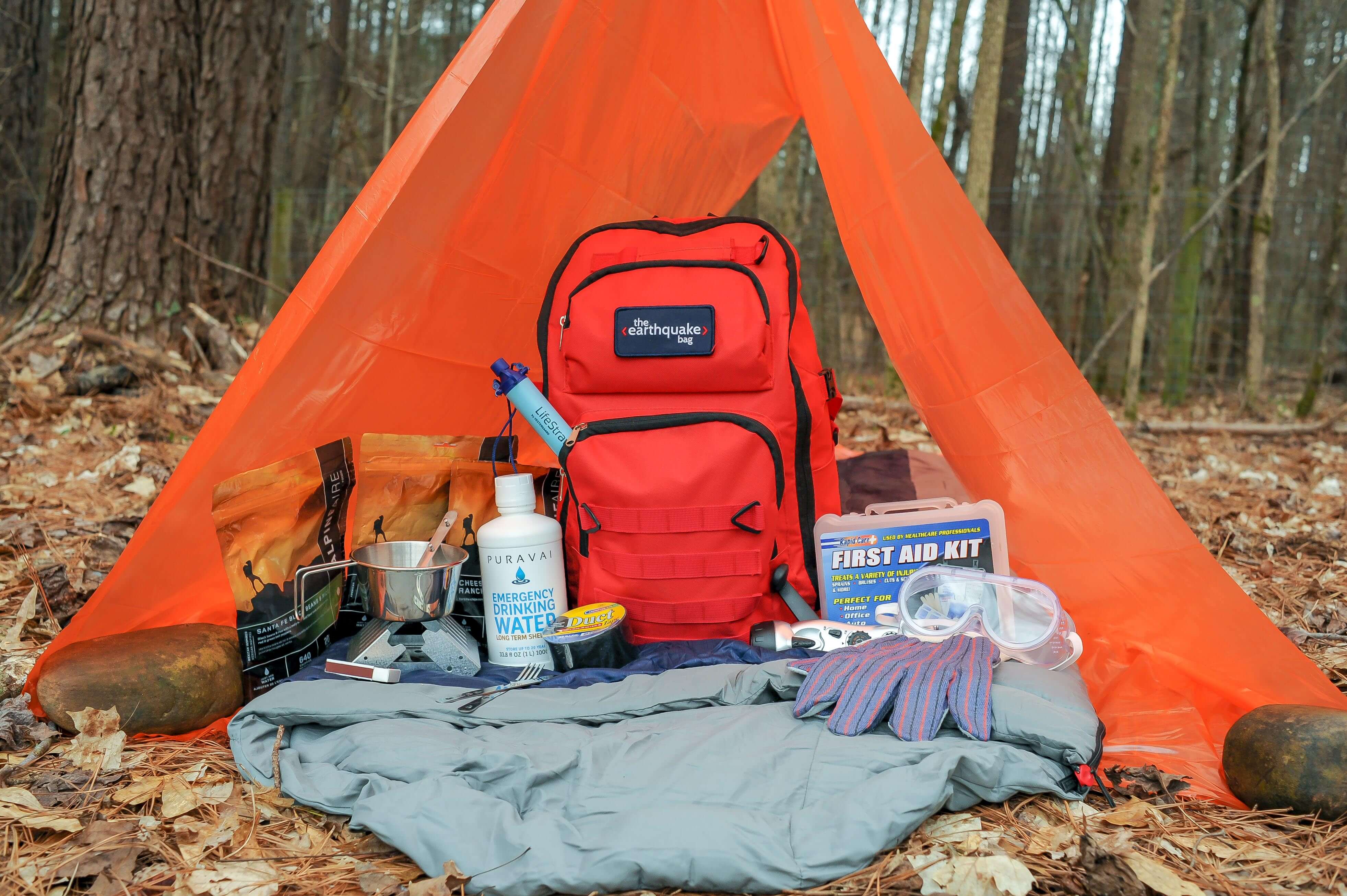 The same applies to humans and this is why keeping your situational awareness levels high is an important step to fending off an attack.

If a lady is about to be assaulted on a dark street, often pulling out a gun will stop her assailant in his tracks, however it is important that she have all the legal paperwork to carry the gun and know how to handle the gun.

When someone sees a weapon they have a natural fear and knowing this is often all it takes to scare off an assailant.

Guns are unparalleled when it comes to personal protection.

All the debate and gun control speeches in the world will not stop a rapist the way a gun can.

The same applies to any other criminal.

Your reluctance to carry a weapon will put you in danger because most criminals do not have the same reservations.

They may rob you and stab you to death or they may shoot you.

All you have to do is listen to the news to see how often this is happening.

Assuming that it will not happen to you is sheer arrogance.

A rolled-up magazine, your car keys, your fists and feet are makeshift weapons.

Real weapons will always be superior to makeshift ones, however that does not mean that you should ignore makeshift weapons because in a pinch they might just save your life.

Carrying a firearm, legally, makes life easier if you are cornered by three thugs in an alley, but that does not mean if you do not have a weapon that you cannot survive.

This is why it is important to look at the items around you and think about what you could use at a moments notice against an attacker, even if you are a trained martial artist. Purchase A Firearm And Know How To Use It

There is much more to purchasing a firearm than simply walking into a gun shop and buying one.

You must know how to use it and you must get the legal paperwork to be able to carry it with you.

Even if you have been around guns your entire life, taking a gun safety course is a good idea.

There are also tactical trainings that you can attend.

Carrying a firearm and knowing how to use it is especially important during times of crisis when people are desperate.

You would be shocked to know that some people consider owning a gun the only prepping they need to do.

With that gun, they can rob others and take whatever they have.

This is a very real scenario that often happens during riots.

Purchase a firearm and get the training you need to learn how to handle it, then keep it in a safe place so no one else can take it from you.

Revolvers are easier to use than automatic pistols, however whatever firearm you choose, make sure it has plenty of stopping power.

Self-defense scenarios are very different than when a sniper is perched on a roof a mile away from his target.

You want a gun that drops your attacker as fast as possible.

Most self-defense situations are close-up, so you just need to point and fire, but you also need to make sure you have control of your gun so they cannot use it on you.

It is best to purchase a heavier firearm made of steel so that the recoil is more manageable.Make Sure To Include Non-lethal Weapons In Your Homesteading Self Sufficiency Survival Kit

You may not always be able to carry a firearm with you or you may not always want to, which is why including non-lethal weapons in your homesteading self sufficiency survival kit is so important.

It is pretty easy to keep pepper spray or a stun gun or pepper gun with you.

Carrying at least one of these items is especially important for the ladies or the elderly.

It is also imperative to learn how to use the weapons you have.

Get training, ask questions and find out where you can safely practice using them so you are prepared if an actual need to use them arises.

You don’t want to be fumbling during an actual assault and believe me being in a panic is going to make it hard enough to do what you need to do, so knowing how to do it is going to make the situation a little less stressful.

Seconds make the difference between life and death in a crisis situation.

Be prepared to deal with whatever comes your way so you come out safely. Essential Evacuation Bag Contents For Everyone

Learn what your evacuation bag contents needs to include. A survival backpack is a very important part of a good emergency readiness plan. An emergency evacuation bag should contain essentials to get you through a 72 hour time period. Overpacking your evacuation bag is dangerous! Learn more! What Goes Into Your Emergency Evacuation Bag?

Have you ever wondered what goes into an emergency evacuation bag or as it is sometimes called, a bug out bag? In a nutshell, you need to include things that are essential for survival in an emergency situation over a three day period. Useful Survival Disaster Gear That Every Prepper Should Pack

It is important to know what the most useful survival disaster gear is so you include it in your bug out bag. Here is what every prepper should pack! What To Pack In A Children's First Aid Disaster Survival Kit

Knowing what to pack in a children's first aid disaster survival kit is important, even if you don't have children. These kits are handy in emergencies.